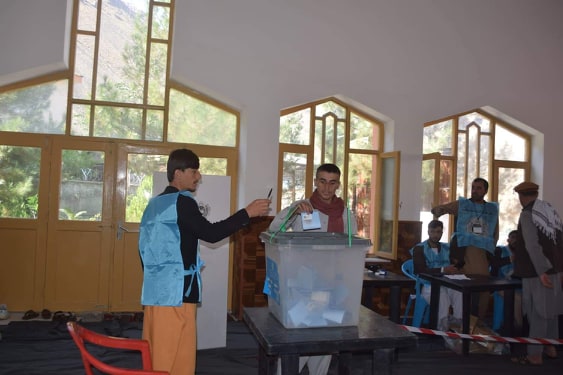 The U.S. government and the United Nations have congratulated Afghans for casting their votes to pick their new president through the ballot box.

The U.S. Department of State has praised the Afghan voters “who showed up at the polls despite technical challenges and threats of violence.”

‘We also commend poll workers and the Afghan security forces who worked to secure voters and polling sites for their courage,’ the U.S. State Department said in a statement.

The U.S. government call on Afghan government institutions and leaders to be ‘transparent’ and ‘accountable’ to the Afghan citizens.

“We expect Afghanistan’s institutions to take all necessary steps to ensure the election, including the investigation of complaints and tabulation of results, is transparent and credible to Afghan voters and the international community,” the statement noted.

Meanwhile, the U.S. government urged both candidates and voter no to ‘prejudge’ the outcome of the election or ‘speculate’ on partial returns and let the Afghan Independent Election Commission (IEC) to announce the election results.

While, the Taliban carried out a number of attacks on polling centers during the Election Day, in which dozens of people were killed and wounded, the U.S. “categorically condemn all attacks on voters and other efforts to undermine the election. These attacks stand in stark contrast to the aspirations of the Afghan people for peace, security, and economic stability.”

Meanwhile, the UN Secretary-General António Guterres has also welcomed the conduct of presidential elections in Afghanistan on 28 September and commended all Afghans “who exercised their democratic voice and upheld their right to vote, braving security concerns.”

“[The Secretary-General] congratulates them on their commitment to selecting their leaders through the ballot box,” according to a statement issued by a UN spokesperson on Sunday.

The UN chief encouraged all stakeholders to enable the electoral institutions to exercise their responsibilities in full, “including by addressing any complaints through the appropriate channels and procedures.”

In a similar vein, as the polls closed on Saturday, the UN Assistance Mission in Afghanistan (UNAMA) tweeted: “Patience and level-headedness now required for Afghanistan electoral bodies necessary time to conduct their work counting votes, reviewing complaints and announcing results. Parties must meet their obligations, respecting codes of conduct and helping ensure stability in the period ahead.

“UNAMA commends all voters who cast their ballots … and all the Afghan actors who helped make it possible. The mission condemns those who resorted to intimidation and violence to try and derail democracy,” the mission said earlier on Twitter.

Despite Taliban’s repeated threats, Afghans lined up at polling stations early on Saturday to cast their votes in the fourth Afghan presidential elections.

A total of 18 candidates were registered for the presidency including President Ashraf Ghani and Chief Executive Abdullah Abdullah. However, four candidates withdraw from the competition.

More than 9.6 million voters were registered with the Independent Election Commission to cast their votes but apparently there was a low voter turnout.