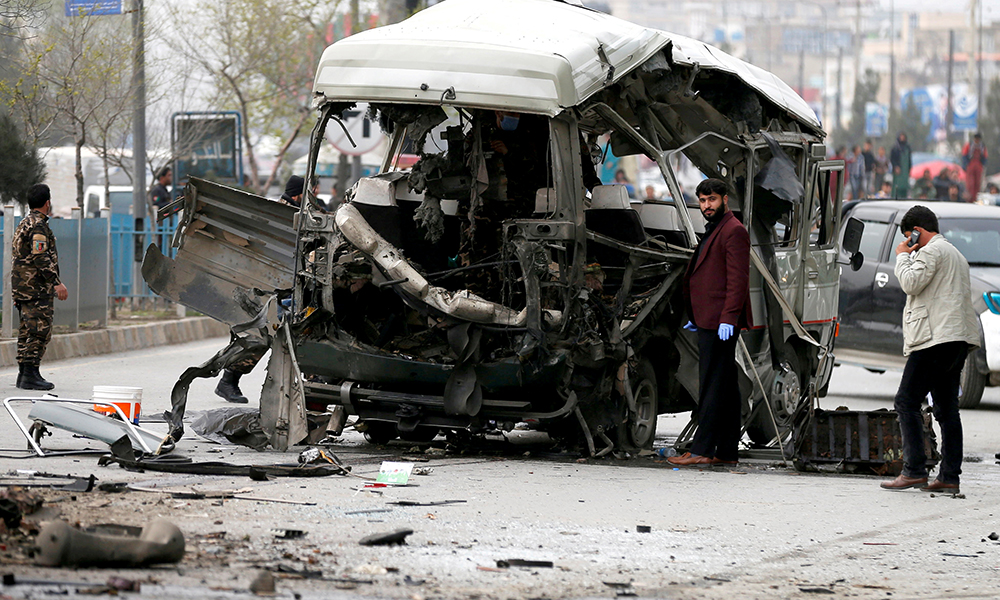 The Afghanistan Independent Human Rights Commission (AIHRC) on Sunday said in a new report that in the first six months of this year, 5,321 civilians have been killed or injured, a substantial increase against the same period last year.

According to the report, the AIHRC said in 1,594 different security incidents, a total of 5,321 civilians have been killed or injured in the first six months of 2021. Among these civilian casualties, 1,677 were killed, and 3,644 were injured.

The AIHRC stated that a total of 154 women were killed and 350 wounded between January and June this year.

The number of women civilian casualties in the first six months of 2020 was 297 in total which included 126 killed, and 171 injured.

Unknown perpetrators were responsible for another 1,190 civilian deaths and injuries in the first half of this year, including 425 civilians killed and 765 civilians injured. These attacks have not been claimed by any groups or individuals.

In addition, 16 civilians have been harmed due to rocket attacks from Pakistan to Afghanistan territory in the first six months of 2021. This includes two civilians killed, and 14 others injured.

A comparison of both periods shows 20 percent reduction in 2021.

The watchdog found that the use of IEDs, roadside mines and car bombs in the first half of the year accounted for 37 percent of the total civilian casualties.

The number of civilian casualties caused by explosions tripled in the first six months of 2021 compared with the same period in the previous year.

The number of civilian casualties caused by targeted killings during the same period in 2020 was 945 in total which included 533 killed and 412 injured.

This shows a 110 percent increase in the number of civilian casualties caused by targeted killing in the first six months of this year compared with the same period in the previous year.

In addition to this, the AIHRC found that 39 power pylons were destroyed by unknown people in the first six months of 2021 in different provinces including Kabul, Parwan, Baghlan, and Kunduz.

In addition, the ongoing armed conflict in the current year has resulted in destruction of 130 bridges and culverts, 13 schools, and three clinics only in the first six months of 2021.

“The above statistics are alarming and obvious examples of violating war principles,” the watchdog said in the statement.

The AIHRC once again called on all parties to the conflict to respect the demands of the AIHRC and to implement its recommendations; otherwise, the responsibilities and consequences of violations will lie with the violators, causing civilians casualties and destruction of public facilities and the personal properties.

1. AIHRC believes that dialogue and negotiations are the most humane, logical, and effective ways to resolve conflicts and we are reiterating it more seriously and stressing our previous stances in this regard. The country’s problems can be solved behind the negotiating table, not on the battlefield;

2. The Commission once again calls on the United Nations, domestic and international organizations and institutions influencing the war and peace in Afghanistan, as well as the international community, to use all their resources, opportunities, and capacities to end the current violence and devastating war before it leads to more human catastrophes;

3. We call on the Taliban, more specifically and emphatically, to care the suffering of the Afghan people, respect the interests of the country, the collective rights and aspirations of its citizens; in order to resolve disputed issues and achieve a just peace, they should return to the negotiation table and meaningful dialogue and pave the way for a long-term ceasefire and peace;

4. All parties to the Afghan war are required to respect international humanitarian law and standards, as well as not diverge from the laws and regulations of war during armed conflict. Any infringement of these regulations will result in severe penalties for the violators, who will be tried fairly and judicially in all circumstances;

5. According to international humanitarian law, the deliberate and systematic killing and harming of civilians is a clear example of war crimes and crimes against humanity, and if such approaches are motivated by hatred of certain ethnic, religious, or social groups, they are considered genocide and cannot be forgiven. The Government of Afghanistan and the relevant international organizations must seriously prosecute the perpetrators of such crimes;

6. The use of people as human shield as well as war in residential areas, clearly causes enormous harm to civilians, particularly children and women, and is an evident violation of international humanitarian law. Neither side in the fight should employ such cruel and brutal tactics. Furthermore, hostage-taking, assassination, targeted killings, and extrajudicial trials cannot be justified, and no military unit should engage in such tactics;

7. We specifically call on the Taliban to treat detainees and prisoners in accordance with international humanitarian law, and to guarantee that no captives or detainees are punished or brutally killed as a result of the extrajudicial measures, and prevent retaliatory actions by their men;

8. Emotional remarks and the issuance of instructions contrary to international human rights and humanitarian principles by some Afghan government officials have raised serious concerns among civil society organizations, the AIHRC, and the country’s intellectual community; we urge the leadership of the Government of Afghanistan to refrain from such destructive and extra-legal approaches;

9. The Taliban leadership is strongly urged to investigate all cases of violations of international humanitarian law in areas under their control and to prevent further harm to the country’s civilian people by stopping anti-human rights actions by their militants and commanders. The leadership of the Taliban must explain to the Afghan people the results of its work in this regard;

10. We urge the government’s armed opposition to align its definition of civilians with international humanitarian law principles and to refrain from attacking Afghan government civil servants, civil society activists, human rights defenders, aid organizations, journalists, religious scholars, and dissidents. The armed opposition’s leadership must understand that continuing to violate international human rights and humanitarian standards would have major consequences for them;

11. We urge the armed opposition’s leadership, particularly the Taliban, to prevent the destruction of specially protected facilities in regions under their control, such as hydroelectric dams, historical and cultural sites, power generation sources, and hazardous energy sources. In addition to preventing the destruction and looting of public and private assets, the dominant groups in the region must also prohibit third-party looting and destruction of these resources;

12. According to AIHRC and international organizations, the Taliban’s use of roadside bombs and improvised explosive devices is a major cause of civilian casualties. Therefore, we urge the Taliban to stop this military tactics;

13. We urge the Afghan government to review its war policies and procedures, resolve the issues that result in civilian casualties, and hold the government’s military perpetrators accountable;

14. We call on responsible organs in the Afghan government to take planned, continuous, and systematic measures to improve the security of all citizens of the country, particularly ethnic-religious minorities, religious scholars, human rights defenders, media activists, and civil activists;

15. We urge the government and aid agencies to provide additional support to the injured, displaced people, and victims’ relatives. We further urge the Taliban to permit the presence and activity of aid organizations in areas under their control, so that the impoverished people and displaced persons affected by the fighting can be helped;

16. Afghanistan is a member of the International Criminal Court (ICC). The Commission urges the International Criminal Court not to be swayed by political pressures from any authority in undertaking a serious and comprehensive investigation into the international crimes committed in Afghanistan. It also calls on the United Nations to send a UN fact-finding mission to investigate the recent horrific incidents against civilians in Afghanistan in a fair and non-political manner, as requested by the AIHRC. We also call on the Government of Afghanistan to welcome the presence of this delegation and to pave the way for a more thorough investigation.

Iran denies involvement in attack on Israeli-managed tanker off Oman