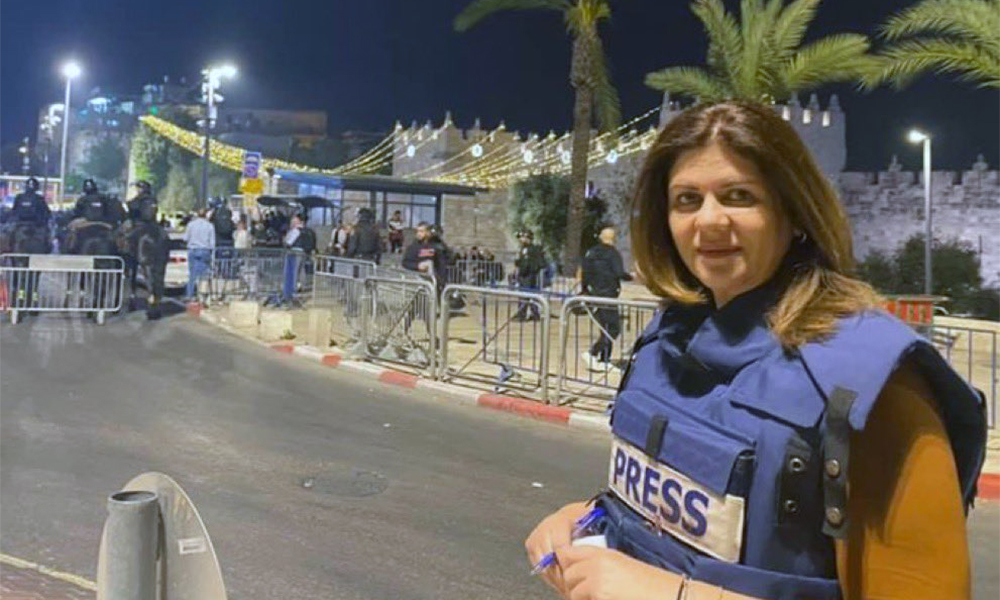 An Al Jazeera journalist was killed on Wednesday by Israeli army fire in the occupied West Bank, the Palestinian Health Ministry said.

A ministry statement said Shireen Abu Akleh, 51, was shot in the city of Jenin.

Another journalist, Ali Al-Samoudi, was shot in the back, the ministry added.

Al-Samoudi said they had been with a group of journalists near Jenin camp when fired on. He also said all of them had been wearing helmets and bulletproof vests.

“We were directly targeted by the occupation forces,” he said in statements cited by the state news agency Wafa.

“The place where the journalists were present was clear to the occupation soldiers, and there were no armed men or clashes in that area,” Al-Samoudi said. “We were deliberately targeted.”

The Israeli army said in a statement that it was “investigating” the Al Jazeera journalist’s death.

The army suggested that the Al Jazeera correspondent may have been shot by Palestinians as they clashed with Israeli forces, which “responded with fire, without causing any casualties,” Reuters reported.

Al-Jazeera TV network, for its part, said Abu Akleh was “one of the first generation of the channel’s field correspondents.”

“For a quarter of a century, Abu Akleh was at the center of danger to cover wars, attacks and aggressions of the Israeli occupation, against the Palestinian people in the occupied territories,” the Doha-based channel said. 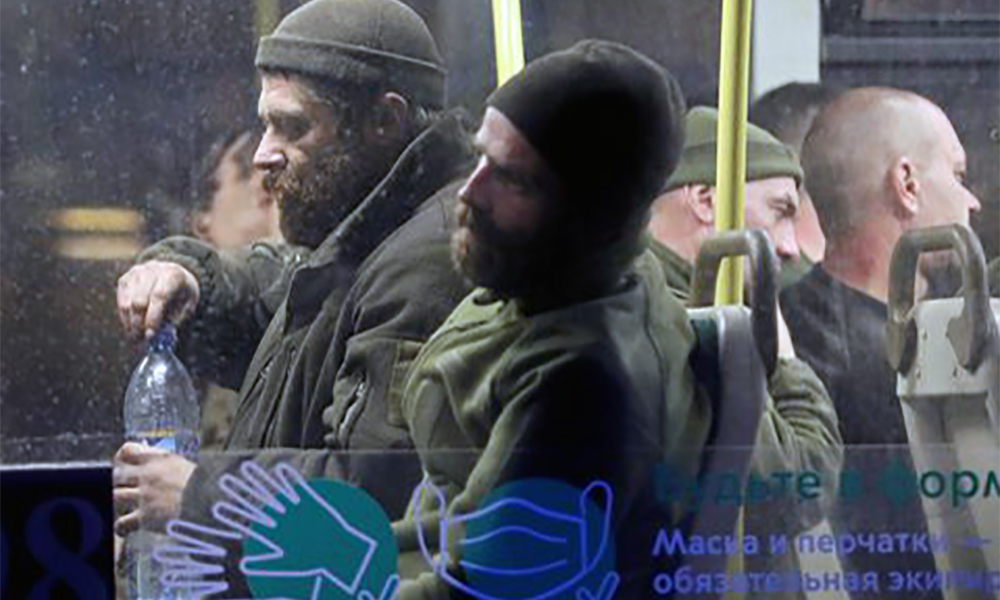 Moscow said nearly 700 more Ukrainian fighters had surrendered in Russian-held Mariupol as it shored up a key gain in the south, while the United States became the latest Western country to reopen its embassy in Kyiv.

Ukraine has ordered its garrison in Mariupol to stand down, but the ultimate outcome of Europe’s bloodiest battle for decades remains unresolved.

Top commanders of Ukrainian fighters who had made their last stand at the Azovstal steelworks in the port city are still inside the plant, according to the leader of pro-Russian separatists in control of the area, Denis Pushilin, quoted by local news agency DNA on Wednesday.

Ukrainian officials have declined to comment publicly on the fate of the fighters.

“The state is making utmost efforts to carry out the rescue of our service personnel,” military spokesman Oleksandr Motuzaynik told a news conference. “Any information to the public could endanger that process.”

Ukraine confirmed the surrender of more than 250 fighters on Tuesday but did not say how many more were inside.

Russia said on Wednesday an additional 694 more fighters had surrendered, bringing the total number to 959. Its defence ministry posted videos of what it said were Ukrainian fighters receiving hospital treatment after surrendering at Azovstal.

Mariupol is the biggest city Russia has captured so far and allows Russian President Vladimir Putin to claim a rare victory in the invasion it began on Feb. 24.

Moscow has focussed on the southeast in recent offensives after pulling away from Kyiv, where, in a further sign of normalisation, the United States said it had resumed operations at its embassy on Wednesday.

“The Ukrainian people … have defended their homeland in the face of Russia’s unconscionable invasion, and, as a result, the Stars and Stripes are flying over the Embassy once again,” U.S. Secretary of State Antony Blinken said.

A small number of diplomats would return initially to staff the mission but consular operations will not resume immediately, said embassy spokesperson Daniel Langenkamp. The U.S. Senate later approved veteran diplomat Bridget Brink as ambassador to Ukraine, filling a post that has been vacant for three years.

Canada, Britain and others have also recently resumed embassy operations.

Moscow says it is engaged in a “special military operation” to demilitarise and “denazify” its neighbour. The West and Kyiv call that a false pretext for invasion.

Finland and Sweden formally applied for NATO membership on Wednesday, a decision made in the wake of the Ukrainian invasion and the very kind of expansion that Putin cited as a reason for attacking Ukraine.

U.S. Ambassador to NATO Julianne Smith called for an expedited accession process that could be “done in a couple of months”, but NATO member Turkey said its approval depended on the return of “terrorists”, namely Kurdish militants and Fethullah Gulen followers.

Finland and Sweden were both militarily non-aligned throughout the Cold War.

Although Russia had threatened retaliation against the plans, Putin said on Monday their NATO membership would not be an issue unless the alliance sent more troops or weapons there.

The European Commission announced a 210 billion euro ($220 billion) plan for Europe to end its reliance on Russian oil, gas and coal by 2027.

Meanwhile, Google (GOOGL.O) became the latest big Western company to pull out of Russia, saying its local unit had filed for bankruptcy and was forced to shut operations after its bank accounts were seized. read more

On the battle front, Russian forces pressed on with their main offensive, trying to capture more territory in the eastern Donbas region which Moscow claims on behalf of separatists.

Ukrainian presidential adviser Oleksiy Arestovych said Ukrainian saboteurs had blown up the tracks ahead of an armoured train carrying Russian troops in the occupied southern city of Melitopol. read more

“The partisans got it, although they did not blow up the armoured train itself,” he said in a video posted on social media, contradicting an earlier statement from Ukraine’s territorial defence force that the train had been blown up.

The capture of Mariupol, the main port for the Donbas, has given Moscow full control of the Sea of Azov and an unbroken swathe of territory across Ukraine’s east and south.

The governor of the Luhansk region, part of the Donbas, said there had been a number of attacks there.

“Most of the shelling today was conducted in Severodonetsk and villages nearby… The Russians are still trying to cut the “road of life” through the centre of Luhansk region linking Lysychansk and Bakhmut,” Serhity Gaidai wrote on Telegram. 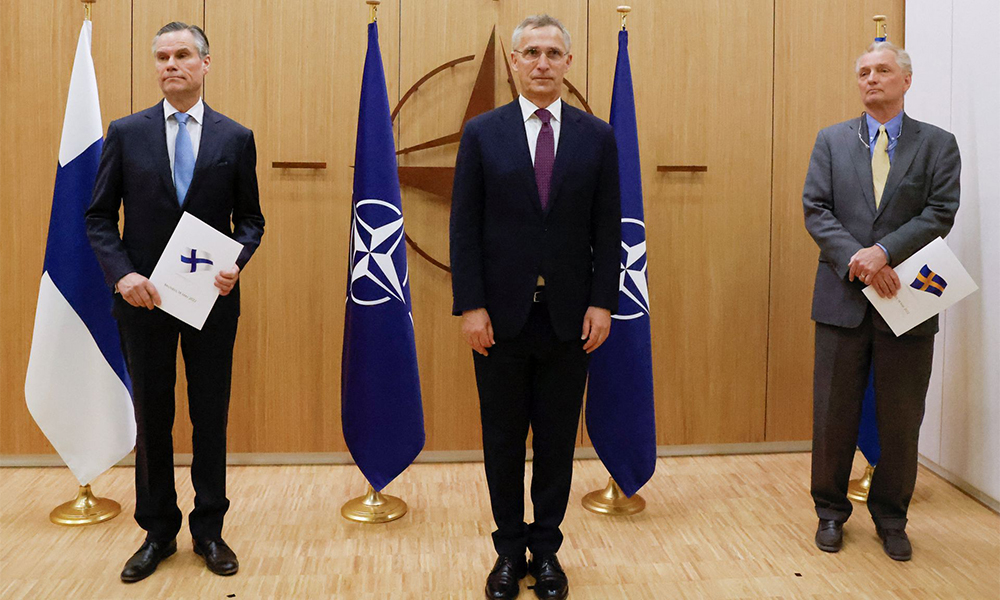 Finland and Sweden formally applied to join the NATO alliance on Wednesday at allied headquarters, a decision spurred by Russia’s invasion of Ukraine, and setting in motion an accession process that is expected to take only a few weeks.

Sweden and Finland were both neutral throughout the Cold War, and their decision to join NATO is one of the most significant changes in Europe’s security architecture for decades, reflecting a sweeping shift in public opinion in the Nordic region since Russia’s Feb. 24 invasion.

“This is a historic moment, which we must seize,” NATO Secretary-General Jens Stoltenberg said at a short ceremony in which the Swedish and Finnish ambassadors to the alliance handed over their application letters, each in a white folder embossed with their national flag.

“I warmly welcome requests by Finland and Sweden to join NATO. You are our closest partners, and your membership in NATO will increase our shared security,” Stoltenberg said. The alliance considers that the accession of Finland and Sweden would hugely strengthen it in the Baltic Sea.

Ratification of all 30 allied parliaments could take up to a year, diplomats say.

Turkey has surprised its allies in recent days by saying it had reservations about Finnish and Swedish membership. Stoltenberg said on Wednesday that he thought the issues could be resolved.

“We are determined to work through all issues and reach rapid conclusions,” Stoltenberg said, noting strong support from all other allies. 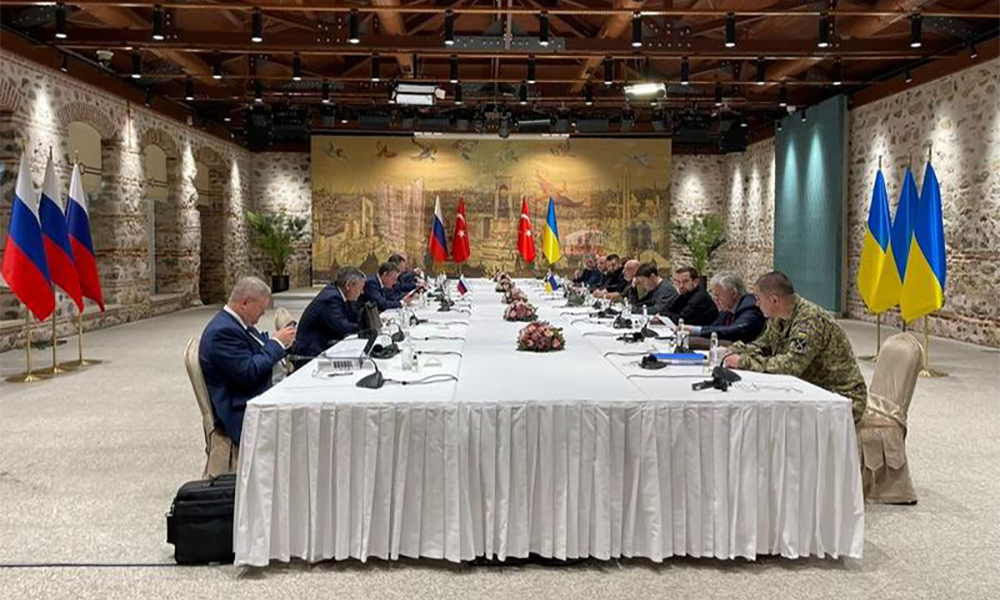 Peace negotiations between Russia and Ukraine have stagnated, officials said on Tuesday, with both sides trading blame and Moscow indicating a return to talks may be difficult.

Russia accused Ukraine of hardening its stance and the West for bolstering the government in Kyiv, with Foreign Minister Sergei Lavrov saying that Washington, London and Brussels want to use Ukraine to their strategic advantage.

Lavrov said he believes no pace deal can be made if negotiators try to “transfer the dialogue” to focus on what the West had to say instead of the immediate situation in Ukraine. That rules out chances for progress in talks, he added.

“We always say that we are ready for negotiations … but we were given no other choice,” Lavrov said.

Ukraine and Russia have held intermittent peace talks since the end of February 2022, just days after Russia invaded its neighbour, but there has been little communication between them in recent weeks.

Also on Tuesday, Lavrov’s deputy Andrey Rudenko said Ukraine “has practically withdrawn from the negotiation process,” while Russian negotiator Leonid Slutsky, said talks are not being conducted in any format.

“The (U.S.) State Department should not try to create “conditions” through military assistance to Kyiv. Useless,” Slutsky said.

The United States is expected to approve a $40 billion package of military and economic aid for Ukraine this week, with overall supply of weapons and aid from the West significantly increasing in recent weeks.

Ukrainian presidential adviser Mykhailo Podolyak confirmed that talks are “on hold” as Russia is not willing to accept that it “will not achieve any goals” and that the war is no longer going according to the Kremlin’s rules.

“Russia does not demonstrate a key understanding of today’s processes in the world,” Podolyak said, according to Ukrainian media. “And its extremely negative role.”

President Vladimir Putin says Russian forces are on a special operation to demilitarise and “denazify” Ukraine. The West and Kyiv call that a false pretext to invade.

Thousands have been killed and millions displaced by the war. It has also left Russia in the grip of tough Western sanctions, and has raised fears of a wider confrontation between Russia and NATO.

“We have had not 10 years, but 20 years since the West began to prepare tools, including the use of NATO and Ukraine to contain Russia since the late 90s. All these years we insisted on negotiations – we have been ignored,” Lavrov said.

“Now we will solve problems depending on how we see them. I will always emphasize: we are ready to solve humanitarian issues,” Lavrov said.