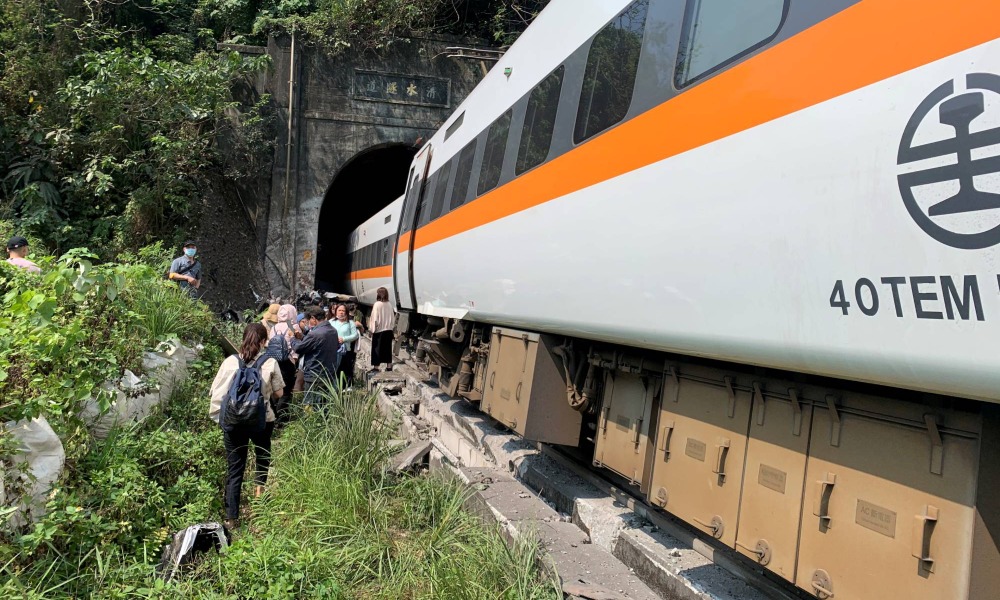 A Taiwan express train with almost 500 aboard derailed in a tunnel on Friday after hitting a truck that had slid down a bank onto the track, killing at least 50 passengers and injuring 146 in the island’s worst rail disaster in seven decades.

Images from the scene showed some carriages ripped apart by the impact, with others crumpled, hindering rescuers in their efforts to reach passengers.

By mid-afternoon no one was still trapped, though the fire department said it had found body parts, meaning the number of those killed, who included the driver, was likely to rise.

“People just fell all over each other, on top of one another,” a woman who survived the crash told domestic television. “It was terrifying. There were whole families there.”

Taiwan’s government said there were 496 people on the train, including 120 without seats. Many were tourists and people heading home at the start of a traditional long weekend holiday to tend to family graves. One French citizen was amongst the dead, officials said.

The train was traveling from Taipei, the capital, to the southeastern city of Taitung.

It came off the rails north of the eastern city of Hualien after hitting a truck that had slid off a road from a nearby construction site, Feng Hui-sheng, the Taiwan Railways Administration’s deputy director, told reporters.

Feng said the manager of the site, which was stabilizing the mountainside to prevent landslides, visited around 9 a.m. (0100 GMT) and stopped his truck in front of the site office.

“At present, it is suspected because the vehicle wasn’t braked properly, it slid for around 20 meters along the site access road and entered the eastern trunk line,” he added.

The official Central News Agency said police had taken in the manager for questioning.

The fire department showed a picture of what appeared to be the wreckage of the truck beside the derailed train, with an aerial image of one end of the train still on the track next to the construction site.

Survivors described their terror as the train slammed into the truck and ground to a halt.

“It suddenly came to a stop and then everything shook,” one told local television. “It was all so chaotic.”

Passengers in some carriages still in the tunnel had to be led to safety, the railway administration said.

Images showed an injured passenger carried away on a stretcher, with her head and neck in a brace, while others gathered suitcases and bags in a tilted, derailed carriage as some walked on the train’s roof to exit the tunnel.

The accident occurred at the beginning of a long weekend for the traditional Tomb Sweeping Day holiday.

Taiwan’s mountainous east coast is a tourist destination. The railway that snakes down from Taipei hugs the coast and is known for its tunnels, in one of which the crash took place. The link to Taipei opened in 1979.

Taiwan’s state-owned railways are generally reliable and efficient but have had a patchy safety record over the years.

The last major crash was in 2018 when 18 people died and 175 were injured when a train derailed in the island’s northeast.

In 1948, 64 people are estimated to have died when a train burst into flames in northern Taiwan.

Related Topics:featuredPassengersTaiwantrain crash
Up Next 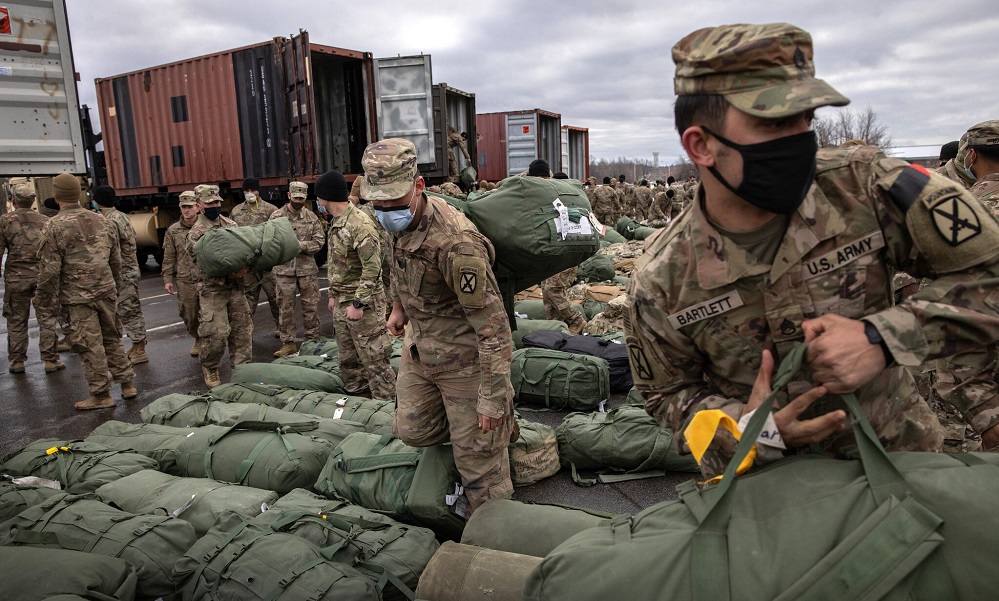 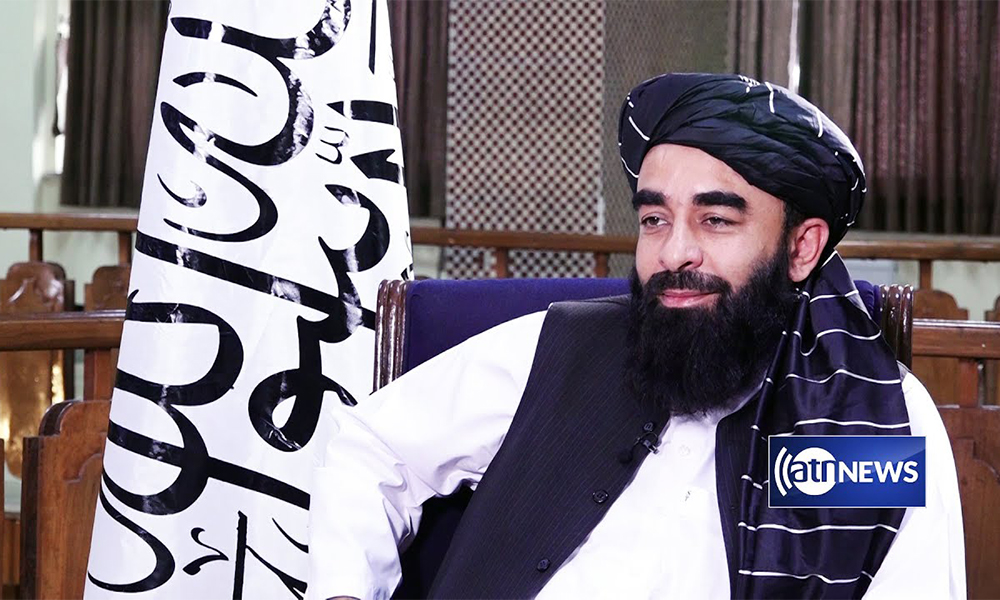 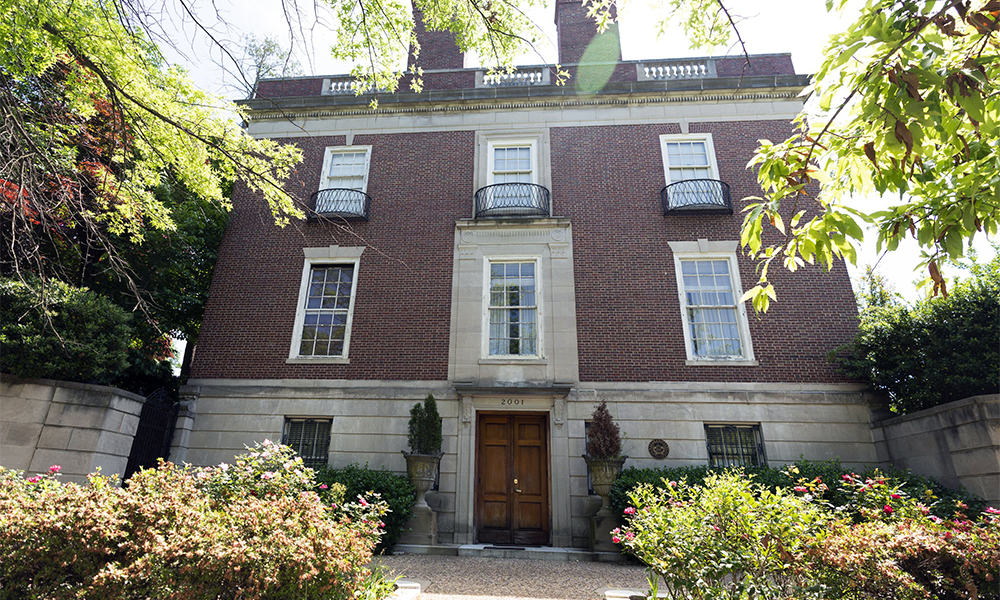 The United States has taken control of the Afghan Embassy in Washington and Afghan consulates in two U.S. states, the State Department has said.

The State Department has assumed “sole responsibility” for the security and maintenance of the diplomatic missions and their “furnishings, archives, and financial assets” and will bar anyone from entering them without its permission until further notice, the department said in a notice to be published on May 18 in the Federal Register, the Associated Press reported.

The move came after the department determined that the embassy and the consulates in Little Neck, New York, and Beverly Hills, California, had “formally ceased conducting diplomatic and consular activities in the United States” at noon on May 16.

Washington does not recognize the Islamic Emirate of Afghanistan (IEA) led government in Afghanistan, which took power last year after the withdrawal of U.S. and allied troops, and does not have formal diplomatic relations with the country.

A department official told AP the step did not signal any change in U.S. policy toward Afghanistan.

The United States took control of the facilities in an agreement with diplomats from the former Afghan government who faced “severe financial constraints that made continued operations unsustainable,” the official said.

The department noted Afghanistan had not requested a third country to serve as a “protecting power” for its U.S. facilities or interests. Since Washington closed its embassy in Kabul, Qatar has served as the U.S. protecting power in Afghanistan.

The Islamic Emirate, has however, emphasized the need for the establishment of diplomatic relations with the countries and says that interaction with Afghanistan will benefit all countries.