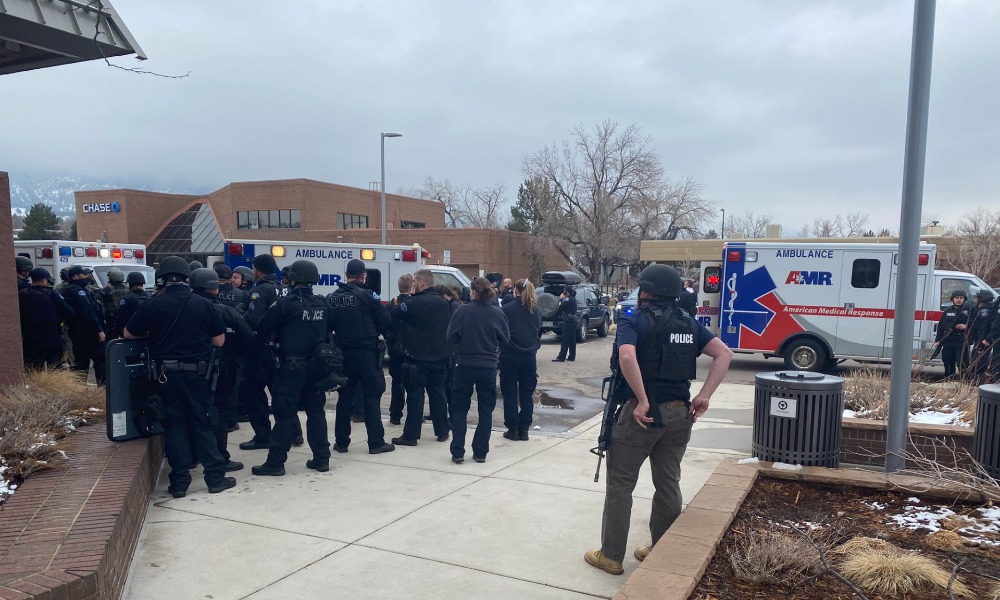 Ten people were killing, including a police officer, in a shooting at a Colorado grocery store on Monday in what was an “unspeakable tragedy” the governor said.

The officer, Eric Talley, 51, an 11-year veteran of the Boulder police force, was the first officer to arrive at the King Soopers grocery store Monday afternoon, Police Chief Maris Herold told NBC News. He had been dispatched after gunfire was reported, Herold said.

Herold provided no details about the other victims. She said a suspect who was injured in the shooting is in custody. She didn’t provide details about a potential motive.

NBC News reported that a police commander, Eric Yamaguchi, said there was no ongoing threat. He said it was unclear whether the person had a connection to King Soopers.

One eyewitness, Dean Schiller said he was outside the store when he heard gunfire and saw three people who appeared to have been injured. Two were outside, he said. The other was inside.

An employee from the store told him a shooter was inside.

Another man told NBC affiliate KUSA of Denver that his granddaughters had gone with their father to the store to get vaccinated against Covid-19. He said they hid inside a coat closet for an hour until authorities entered through the roof and rescued them.

“This is heartbreaking,” he said.

NBC reported a live video from outside the King Soopers showed SWAT vehicles and dozens of police officers, many in tactical gear and camouflage, around the store. Some of its front windows appeared to have been shattered.

NBC reported a man with his hands behind his back could be seen leaving the store with authorities. It wasn’t clear whether the man, who was wearing no shirt or pants and had blood streaming down his leg, was the person of interest.

Several minutes later, a line of people who appeared to have been inside the store could be seen leaving surrounded by officers.

A spokesperson for the grocery store said the company was “horrified by the senseless violence.” Colorado Governor Jared Polis called the shooting an “unspeakable event” and said he was “closely watching” the situation.

“I’m incredibly grateful to the brave men and women who have responded to the scene to help the victims of this senseless tragedy,” he said.

Related Topics:ColoradofeaturedUSUS shooting
Up Next